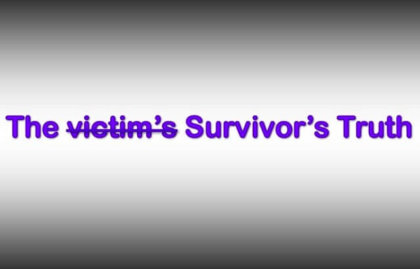 Whether the words come from a friend, family member, someone you trust, or a stranger who feels the need to share his or her opinion on your situation, experiencing victim-blaming as a survivor of domestic violence can be very demoralizing. Without even realizing it, you have now victimized the victim.

We read the paper, scroll across Facebook, or some other form of social media. We see a story about a woman who has been abused by someone she once trusted, only to scroll down to read the comments. The comments of judgment and shaming directed towards the survivor. And they are not just coming from men, but from women who have also been abused but decided to keep it as a secret.

“Didn’t she have a licensed firearm, isn’t she trained in using a gun?”

‘What did she do to make him upset?”

“Why didn’t she shoot him?”

The reality of this epidemic is that people’s reaction to domestic violence is emotionally charged. Automatically the assumption is that the victim did something to incite the abuse, because domestic violence has been silently embedded in our culture. Many identify domestic abuse as “normal” in heterosexual partnerships. Which is also a result of cultural associations of masculine identity with control. This means that structural gender inequality both underpins the offense and also acts to normalize domestic abuse. In essence, if people can find a reason why the abuse is the victim’s fault, then abuse is something that can not only be controlled, it can be prevented. Well, this is false; abuse cannot be controlled. There is no script for domestic violence, and you cannot control a hostile person or someone who has borderline personality trait(s), or one who identifies violence as their only option to problem-solving.

When the woman tries to leave her abuser, that is often the time the abuse escalates, as the abuser is desperate to make her stay. You cannot just leave without putting yourself at risk for additional beatings and sometimes even death. Abuse comes in many forms: kicking, hitting, strangling, biting, threatening, name-calling, reckless driving, etc. Abuse is physical, verbal and psychological, and makes the person afraid for their safety. I remember it like it was yesterday. My abuser told me how much he loved me, and how he would go crazy if I left. I remember him also threatening me, “If you leave me I will kill you, or destroy your life,” with emphasis, as if it really hurt. Just the thought of being killed if you tried to escape can paralyze anyone trying to leave. I remember being scared, terrified, and having no alternative but to turn to the crumbling criminal justice system for help. Then the legal abuse began.

Legal abuse is when the abuser manipulates the criminal justice system, lies to the police, attorneys and other legal entities to try to control the victim. The abuser would go to any length to deny that the abuse occurred, minimize or rationalize what happened, or try to place the responsibility on the victim. And sometimes “the melee is so sweet” that bodily injuries, recorded threatening phone calls, voice notes, police reports and other evidence get overlooked. Abusers will continuously try to discredit the character of the victims to their family, friends and to people within the criminal justice system. They may spread rumors and distort the facts, so that even law enforcement may find it difficult to determine who is telling the truth. This happens almost every time an abuser is caught. The abuser may say that the victim is crazy, a liar or even worse, that she is the one who is obsessed with them. These tactics can cause the victim to further isolate herself and question if it even makes sense coming forward.

The case then becomes a “number” for the attorney general’s office and the victim is left with no choice but to serve as a witness for the government. And what happens when the defense attorney is a skilled storyteller? Then the abuse continues when the storytelling begins: no facts, no evidence, just “smoke and mirrors.” If the facts were given, it may have been noted that the abuser has a history of violence, is a convicted felon, a thrice-convicted murderer, on probation, or that he was placed on 24-hour house arrest because the court found probable cause that he violated the court’s release order. Perhaps if we dig further into the facts the jurors would have been made aware that there were multiple police reports, records of stalking, voice messages/recordings, telephone harassment, threats, and even a voice recording of the victim begging the abuser’s mother to “Come outside and see what your son has done to me.”

This is a survivor’s truth.

Stay up to date with our mission, events, educational information and much more! We promise not to spam you.